We have the honor of hosting Cees de Jong on his last speaking engagement as the CEO of Chr. Hansen. Recognised as one of Denmark’s top 6 CEOs, Cees has steered Chr. Hansen on delivering on the ambitious “Nature’s No. 1” strategy aimed at leveraging the company’s unique competencies to align with the global megatrends, and he has been the driving force behind the initiatives to pursue new growth opportunities for the company. As a result, under his leadership, Chr. Hansen’s market capitalization increased from just over EUR 3 billion when Cees joined in 2013, to EUR 10 billion end 2017. He has accomplished this through a high focus on quality, innovation and integrity-driven leadership.

“There is obviously always a risk of being arrogant and smug because our results are so good. The numbers are fantastic, and we should be proud, but it’s even more important to focus on what we can achieve going forward and continue to work hard.” Cees said when interviewed after yet another successful financial year, further demonstrating his results-driven nature that has been instrumental in leading the company on the ambitious internationalisation and expansion agenda.

But what does it take to steer a biotech company on such growth journey? How do you lead a Danish purpose-driven company with 140 years history to be an international organisation with over a EUR 1 billion revenue? And what reflections do you have as an international leader in a Danish company and society? What are some of the key learnings from your leadership journey to becoming one of Denmark’s top CEOs? These are some of the insights Cees de Jong will share with us in this session as he reflects on his journey over the past five years and his career as a whole.

Cees de Jong joined Chr. Hansen in April 2013 as CEO. Before this, Cees de Jong held various managerial and board positions within the biopharmaceutical and food industry. His career started in 1989 as a newly educated doctor and holder of an MBA from Erasmus University in Rotterdam, when he joined the Dutch ingredients and pharma company Gist-Brocades, one of Chr. Hansen’s toughest competitors at the time. Seven years later, he became the youngest member of the group management team as the Managing Director for the Industrial Pharmaceutical division. Following Gist-Brocades’ acquisition by DSM in 1998, Cees was appointed President of the Anti-Infectives division of DSM.

Over the next 20 years, he held multiple senior roles in companies like Campina, Quest International and the biotech company Crucell. He received numerous CEO offers following the sale to Johnson and Johnson of Crucell, where he was Chief Operating Officer and member of the Board. But it was only with the Chr. Hansen opportunity that he felt genuine alignment of the organisation’s mission with his purpose and vision.

Chr. Hansen, founded in 1874, is a leading, global bioscience company that develops natural ingredient solutions for the food, nutritional, pharmaceutical and agricultural industries. Chr. Hansen has been delivering value to their partners – and, ultimately, end consumers worldwide – by producing cultures, enzymes, probiotics and natural colors for a rich variety of foods, confectionery, beverages, dietary supplements and even animal feed and plant protection. Every day more than 1 billion people drink or eat something that contains natural ingredients from Chr. Hansen. These natural innovative solutions help address global challenges by supporting efforts to reduce food waste, promote sustainable agriculture and improve global health. In fact, 81% of the company’s products contribute to the UN sustainability goals.

With such a seasoned leader behind the podium talking about a purpose-driven and high growth company, it is without a doubt bound to be one of the most insightful events of the year. Book your spot to be sure not to miss it. 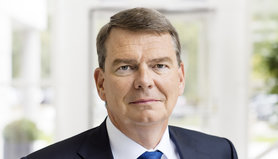